States With The Cheapest Energy 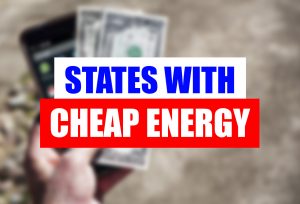 When it comes to reasons for moving to a different state, perhaps the most common one is work. However, sometimes another reason may be more likely. In the day and age where many people work from home, it is becoming more important to find a place where the bills are low. So if the energy is cheap, that is a huge factor for moving.

Today we are covering some of the cheapest states to move to if you want to have cheaper energy. Yet we will also take into account living costs in general, so that there is a balance within the list. As Chicago movers we know that cheaper energy doesn’t always mean cheaper living.

If you are living in Chicago, then you may be surprised that Illinois in general is a pretty good place when it comes to energy costs. All things considered, it only has $98 in electricity bills on average, even though natural gas costs are $58. Obviously, natural gas is quite high in terms of cost and also in terms of consumption. However, for those who are not that dependent on it, this is great news. When you take all energy costs into account the average comes to $281 per month.

With only $265 average energy costs per month, Washington makes for quite the savings-oriented state. It has the lowest electricity prices in the States, which is great news for those who are dependent on electricity. That being said, if you use your car a lot, the fuel costs can pile up, as they are not as cheap there. All in Washington makes for a great state to save on energy bills if you don’t mind its geography.

Of all the states, Colorado has the cheapest bills (with one exception) when it comes to energy. Given its four-season climate, its great geography and a lot of emphasis on outdoors activity, Colorado is a great choice for many young folks. It strikes a great balance between electricity, natural gas and motor fuel costs. In the end it all averages out to $251 per month.

The Exception To The Rule

If you look at similar lists you will see that what tops them is District of Columbia. However, in our opinion this is not right. Not that the statistics are wrong, but that you cannot take such a small place and count it as a state. Naturally, many things there will be cheaper because of several factors, so the stats we get are not exactly clear-cut.

With that being said, Washington, DC is still the cheapest place in terms of energy bills, though that doesn’t say much about job opportunities. It isn’t as if you can simply move there on a whim without comparing other things first.

At least now you know some good places with cheap electricity, fuel costs and natural gas. You can always trust us with your moving if you decide to do it!