Tips for a Stress-free Summer Move 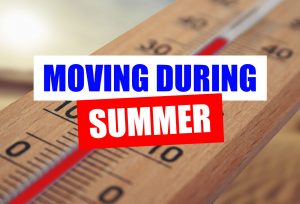 Summer is already here, and although here in Chicago we welcome it with open arms, the heat can drag us down sometimes. However, it gets even worse for people in the southern parts of the country. And yet summer is one of the busiest periods for moves. What gives?

Well, many people can free themselves up during the summer, and the weather will likely not interfere with transporting anything (unlike snowy conditions, for example). That being said, summer has its own challenges, so we have to take a look at those!

As professional Chicago movers we obviously have quite a lot of work to do during the warmer months. Today, however, we are going to give you a few tips on how you can make your summer move a bit more bearable. Let’s begin!

Tip #1: The Morning Is Your Friend

The heat is not as strong early in the morning, so you should try to take care of your tasks then. We think that from 6 am to 10 am you can do quite a lot, and that will help you escape the intense heat that comes after 10 am. Although sometimes (if the weather is cloudy, which is common in Chicago), you should not worry so much about the heat.

Tip #2: Space Your Work Out

The weather may be fine, but during the summer people are prone to dehydration. While you can alleviate that somewhat by drinking a lot of water, your muscles will still have to take a break. So instead of cramming every single task in a couple of days, try to space it out during the week.

This can be done by packing the least used rooms first, the things that you can do without and so on. It is better to spend an hour a day packing and figuring things out throughout the week, instead of stressing over it in a single day. Not to mention that the heat can also make it unbearable.

This ties together with the previous tip, but whatever you do, don’t try to think that you can carry out a move all on your own. If the sun is shining bright, and you sweat a lot, exhausting will definitely beat you. The unfortunate part is that a lot of us don’t realize when we are actually exhausted and need a break. So you can easily push your body beyond the limit and cause harm.

That is why you need to avoid straining yourself too much. It is much better to get professional help, or at least a couple of friends to carry things with you, than trying to figure out a move all on your own.

Finally, you should definitely worry about hydration and food as well. Don’t overeat on junk, and instead count on worthwhile calories that can fuel your body with proper nutrients. Slow carbs, a good source of protein and a lot of minerals will get you far!