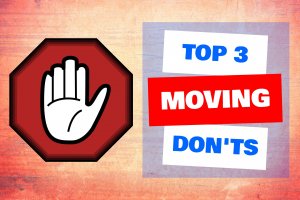 Moving – don’t you get filled up with joy the moment you hear (or read) that word? Yes, perhaps not. Definitely not. But it’s still a part of life and it cannot be dismissed as easily. So what can you do about it to make it go alright?

So today we have for you the 3 moving don’ts that we’ve seen through the different moves we’ve gone through. Sometimes people hire us just for the moving part, other times they have messed up the packing and get us to do that for them as well. And we’ve definitely seen some stuff. So if you don’t want to get all messed up, you can simply hire the professional Chicago movers of H2H Movers.

I am not entirely sure why people think moving doesn’t need a lot of planning. Even if they’ve been through the experience a few times, quite a lot of people fail to plan early.

The truth is that especially in bigger cities it’s hard to book a good moving company on short notice. And even if you get to it, you may have to pay premium.

Avoid feeling the pressure of the last-minute move and just schedule everything accordingly.

Many people, even after a couple of disastrous moves, think moving can be easily winged. No planning, no preparation, no nothing. But you guessed it – that’s not the case!

You can’t say “Ah, I’ll just start somewhere”, because the truth is you won’t. When you have a room full of boxes and you have no idea from where to start filling them up, you will instantly feel overwhelmed. And that feeling is the killer of productivity.

The easiest preparation is to download a moving to-do list, or a checklist for all the general items. That way you will have somewhere to start and won’t feel burned out before you even begin.

Many people think they can lift more than they actually can. This is more of a problem for men, but it can happen with women as well. Many people are not aware of their limitation.

In order to avoid such risky situations, you should stick to smaller boxes. Preferably get ones that are made specifically for moving. They will be sturdier and will have handles, to make moving them around much easier.

Moving is not fun. At least not in general and not by default. But you can turn that into a nightmare, if you do the “don’ts” we’ve mentioned in this list. If you make sure to avoid them, you will be on your way to a much smoother move.