3 Tips for a Spring Move

Spring is around the corner and although warm weather won’t be hitting Chicago that soon, we can still enjoy a little bit of it. With the new season on the horizon people start think about moving and they often start making plans exactly for a spring move. But you should know some things before diving in too deep. They will make your move easier!

But let us point out that any move can really be made easier if you hire the right Chicago movers for the job – namely H2H Movers. You know us, you love us, so give us a call and get your stuff moved, guys! Anyway let’s hit it with tip number one.

#1 The Early Bird Gets The Worm 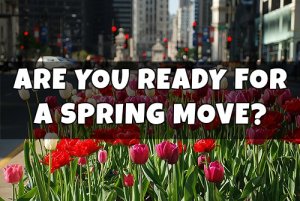 Ever wondered why they always teach you that saying? Well, it’s not for nothing! Do you think a spring move is a great idea? The weather will be a bit warmer, but not hot, you will avoid the summer rush and will enjoy a new home for a new season, right? Well, guess what – you and thousands of other people think the same.

Do you want your spring move to be all well and good? Don’t wait! Get a quote, book the move and you will be ready to go before you know it.

#2 Spring Cleaning Comes Before the Move

Well, we’ve told you to get a quote, but you know what? You can first get your place in order. But let me tell you, we don’t really care how tidy it looks. Our tip is about something else – figure out what you don’t need and get rid of it. No, no, you don’t need to throw everything away, just, you know, give it to someone who might want it (a charity is always a great option if we’re talking about something that may be of use0.

That being said – you don’t want to throw everything out. Otherwise what are we going to move? Yeah, don’t go overboard with it. But those magazines from three and a half years ago? Yep, you don’t need those – to the trashcan they go!

So you’ve started de-cluttering? Good for you, you’ve listened to us! Or maybe you just see the sense in it. It doesn’t matter really. However, do you know how you can make the move easier later on? Well, while you are going through your stuff, make a list of everything you want to move. Or at least the things that matter. Perhaps you are not that worried if that stack of paper is going to get to your place, but definitely mentioned the golf clubs or perhaps your second favorite pair of shoes! (Because we know that you’ve taken care of the first pair already.)

Ah, spring can be awesome! Heck, even in Chicago we love it, although sometimes it can feel a bit indistinguishable from winter, especially in its early days. Nevertheless, if you are to move, do it with style! Or, you know, with the knowledge I handed you today.