What You Should Know About Moving Plants

There aren’t many homes without at least some plant in them. Flowers and other kinds of plants often bring life in an otherwise boring environment. They can make an apartment look more homely and welcoming, while also appeal to many different people. Their aesthetics have been desired throughout history and even if you don’t really care about them, you probably still have received some as a gift.

But what do you do, when you have to move and take your plants with you? First of all, if you’ve ever tried that before, you most certainly know that keeping them alive during the process is borderline impossible. This is why many people prefer to give them away, but if you love your plants, this isn’t going to work, is it?

We from H2H Movers have some advice for you, so you can actually safely move your plant to your new place – but be warned, plants are delicate things, so treat them carefully. 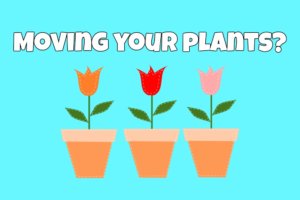 Since most people don’t usually keep their plants in plastic containers, but prefer using ceramic or clay pots, repotting is a regular part of the process. Buy some sturdy plastic containers for your plants and transfer them there. The sooner the better. And don’t forget about the size. Buy similar-sized containers in order to reduce the shock of the plants. If you have to compensate with much soil (say when you purchase a larger container), you may not be able to replant it again in a smaller clay pot.

If your plants can take pruning, go for it a week or two before the move, but definitely a week after the repotting. Be careful about how you prune, so you are not harming your plants. Are you unfamiliar with what plants like and which can take pruning? Search the web and find out. Don’t go in for pruning if you don’t know much about the subject.

Of course, you should water your plants regularly, but immediately prior to the move is not a great time to do it. Instead, water them two days in advance. Thus they will have just enough water when you move them around so they don’t die, but it won’t be too much to be hard to move.

Although we generally advise you to pack everything no later than the night before the move, this doesn’t apply to plants. Instead, keep them out in the open until the last possible moment. Of course, don’t wait till everything is loaded, but you can pack them when the movers arrive so they are ready to be loaded. Be careful to have some cushioning in the boxes and preferably have a box for each plant you have.

If you do everything properly, the only thing left to do is to actually load them and transport them. There isn’t anything special to do during those times, so just be careful about bumps on the road and drive slowly. Treat them as if you are moving your expensive flat screen TV without much protection.