How to Dispose of Certain Items before a Move

Oftentimes we store things in our home, which may prove quite difficult to throw away. Not because the physical part is hard, but because there isn’t really an easy and proper way to do it. Or is there? While some items can easily be gifted, others simply have to be taken out and thrown in the dumpster. Sadly, you can’t just throw them out, because in the case of batteries, for example, things get a bit more complicated. And what about inflammable items? In this article we will cover some (if not most) of the possible scenarios and give you advice on how to manage them. If you need help for the move afterwards, you can depend on our professional team of movers Chicago has for you. However, some items (as those included in this article) that may be hazardous won’t be eligible for a move. So let’s get right on the subject.

First topic on hand is light bulbs – every kind of light bulb for that matter. Although LED bulbs aren’t that dangerous (if they haven’t failed due to electronics, they are safe), fluorescent lighting is, so handle these with care. There may be places where you can take them, but you are probably stuck with the trash can. However, if you can, wrap them nicely in order to minimize the risk of breaking and the gas leaking.

Another potentially harmful thing is out-of-date drugs and medicine. Sure, if not consumed, they are probably harmless, but still, you wouldn’t want to risk it. When cleaning up take this into consideration, especially if you have children. Get rid of them as soon as possible and don’t let kids anywhere near. 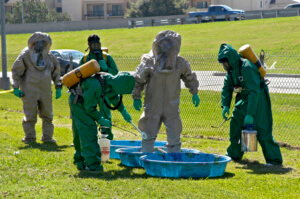 Now let’s talk about used up batteries. Sadly, most people throw them out in the garbage can and in the dumpster, but this isn’t the right approach. First of all, these batteries are prone to leaks. If they leak, they present quite the hazard and should be taken care of quickly. However, throwing it in the dumpster only increases the risk of them not being properly treated. Although some companies do in fact go through garbage and sort things out, this would still be potentially harmful. So do your best to recycle batteries and if you have some lying around your house, find the nearest place you can recycle them (usually there are some, even in the suburbs).

Aerosol sprays and similar types of cans are also potential health hazards and are also inflammable. As you can see on most cans, it is not a good idea to smash them, even if they are empty. Check for places which specifically recycle such cans and if you can’t find any, throw them away. Be careful, however. Adding a bit of padding in a box filled with used up cans may be a good idea.

With these tips you can finally say that you are ready to move.