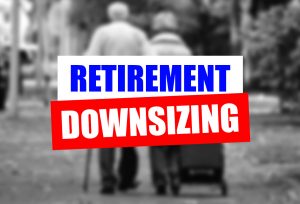 For quite some time now we have been talking about minimalist lifestyles, downsizing and living a more “compact” life. However, we have not looked at it in the context of retirement. Interestingly enough, retirees are adopting minimalist lifestyles all over the States and they see the merits of downsizing. It can have profound psychological benefits on them as well!

That being said, there are certain details you need to know before you decide to move to a smaller place. We from H2H Movers Chicago have quite a lot of experience in moving and even have a program to help seniors with their moves. That’s why we think it is a good idea to give you some advice on how to approach downsizing from the perspective of a retiree.

Many people dream of retiring to a smaller place, somewhere quieter, where they can spend their years in peace. However, a lot of them later find out that they actually miss the convenience of the metropolitan lifestyle.

If you are used to living near the big city (even the suburbs), make sure that you actually want to move to a smaller town. Yes, it may be cheaper, more peaceful, and minimalistic, but if that detracts from your happiness, it isn’t ultimately worth it.

At first you may think that you barely need more than 2 or 3 rooms. Don’t let that fool you though, you may end up needing quite a bit more. A good piece of advice is to always consider having a spare room. It can be used for a lot of things and even if you find out you don’t really need the space, you can turn it into a hobby room – something you can definitely make use of.

How can you determine how big of a space you need though? That’s our next tip!

If you are considering a minimalist lifestyle as a retiree, we advise you to start trying it out right now. How? Go through your items and sort out the things you don’t really need. Everything you feel like you can live without, you should donate or throw out.

Additionally, ask yourself how many spare items you need. Do you need 10 sets of bedsheets? What about your 4 china sets? And can you get rid of all those magazines you’ve been collecting without purpose? Less clutter will make downsizing much easier. Not to mention that even if you end up deciding differently, decluttering would still carry its benefits with you.

When you are getting rid of items, don’t overthink it. If something seems too valuable, don’t try to come up with excuses to throw it out and don’t feel guilty about wanting to keep it. Minimalism is about keeping the things that bring joy to you, whatever those are and however much they are. If it turns out that’s most of your stuff anyway, well, that’s perfectly fine!